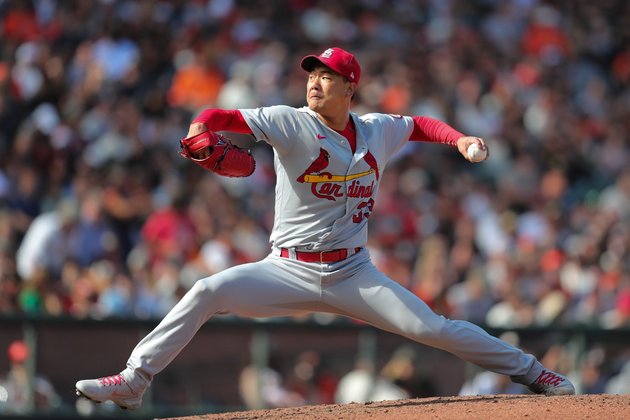 Kwang Hyun Kim is having a month to remember for the St. Louis Cardinals, who conclude a four-game series against the visiting Chicago Cubs on Thursday.

St. Louis sends the 32-year-old left-hander to the mound seeking a series victory after winning two of the first three games.

"He just knows what he's doing out there," manager Mike Shildt said. "He's got good rhythm, keeps guys engaged, works quick, gets ahead in counts. And when he does that, he's super-efficient and allows us to go deep in games and throw up zeros."

Kim is 1-0 with a 0.93 ERA in his two previous starts against Chicago, including six scoreless innings at Wrigley Field on July 10.

The Cubs have lost 22 of their past 31 contests and are hoping for a spark from outfielder Ian Happ, who is batting .179 after going hitless in five at-bats on Wednesday.

Happ's struggles have created an opportunity for Rafael Ortega, who started in center on Wednesday and had two hits from the leadoff spot. The 30-year-old has hit safely in seven of his past 10 games.

"Happer knows he's working toward something, and he is," manager David Ross said. "I've talked to him multiple times. We've had good discussions. Ortega's playing really well right now. You need to reward the guys that are playing well."

Cubs left fielder Kris Bryant, who sat out Wednesday after exiting Tuesday's game with right hamstring fatigue, is expected to return to the starting lineup for the series finale.

Chicago will send rookie Adbert Alzolay (4-9, 4.59) to the mound. The right-hander received a no-decision against Arizona last Saturday, when he gave up two runs on five hits over five innings.

Alzolay is 0-2 with a 2.45 ERA in three career starts covering 14 2/3 innings against St. Louis. He allowed two runs over seven innings in a 2-1 loss to the Cardinals at Busch Stadium on May 22.

The Venezuela native faces a tough matchup against St. Louis first baseman Paul Goldschmidt, who doubled in the first inning Wednesday to extend his hitting streak to 16 games, which is the longest active streak in the majors.

While Goldschmidt is heating up, the Cardinals' bullpen has become a growing concern.

One day after mounting a six-run rally in the ninth inning of Tuesday's 7-6 victory, Chicago trailed 2-1 on Wednesday before tying the game with two outs in the ninth.

With Reyes unavailable on Wednesday, Shildt asked Giovanny Gallegos to record a four-out save. Gallegos was one out away before pinch hitter Eric Sogard doubled in a run to tie the game.