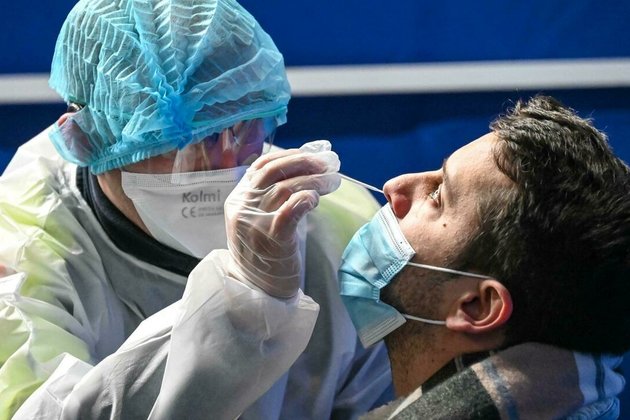 The rate of positive Covid cases increased over 80 percent in a week, confirming that France is facing a new wave of the pandemic. But the government is holding off on imposing new restrictions, as hospitalisations and intensive care cases are not increasing as dramatically.

France registered over 18,000 new cases on Monday, compared to just over 10,000 seven days earlier, an 81 percent increase, a rate that has not been seen since the end of August.

So far, the rise in infections has not translated into a massive increase in hospitalisations and intensive care cases, which authorities attribute to France's high level of vaccination.

However, the numbers are rising: about 8,000 people are currently hospitalised for Covid in France, 1,300 of them in intensive care, compared to 6,500 hpsitalised and 1,000 in ICUs last month.

"We think that the high increase, if it will happen, will happen rather end of December or in January, rather than now."

Hospitals are currently under strain not because of Covid, but because of seasonal illnesses

Why the 'fifth wave' so is virulent

Last winter's wave was of the original Covid variant, which was not as contagious as Delta, which drove this summer's fourth wave.

After a "small wave" during the summer, the "real wave of the Delta variant is here" said Jean-Francois Delfraissy, president of the French scientific council that has been advising the government on Covid policy.

The Delta variant, added to winter conditions pushing people indoors out of the cold, plus a generalized drop in vigilance when it comes to social distancing rules are adding to the increase in cases.

The vaccine will not be enough to limit the effect of this wave, warned Delfraissy, speaking to a group of pharmacists on Monday.

About 75 percent of the French population has received two doses of the vaccine, which is authorised for those of 12-years and older.

The statistic includes France's overseas departments, which have a much lower vaccination rate on average, and where some have been protesting against government measures.

What's behind 'explosive' riots in the French Caribbean island of Guadeloupe Strike in Martinique: Why islanders are furious with the French stateAvoiding new lockdowns

The cientific council is encouraging the reintroduction of masks in certain places where they have been allowed to be removed, and encouraging more working from home.

The requirement of the third booster shot of the vaccine for those 65-years-old and older to have a valid health pass could be moved up, from the announced 15th of December deadline, to next week.

And the booster, which will be made available to those of 50 years-of-age and older who completed their first vaccines over six months earlier, could be generalised to the entire population.

No need to lock down unvaccinated people in France says Macron

"The goal is to do everything to not go to a new confinement," said Delfraissy, adding that such measures "would not be bearable".

Cuba Gets Help From Mexico, Venezuela to Fight Oil Fire

US to join India in military exercises near China border